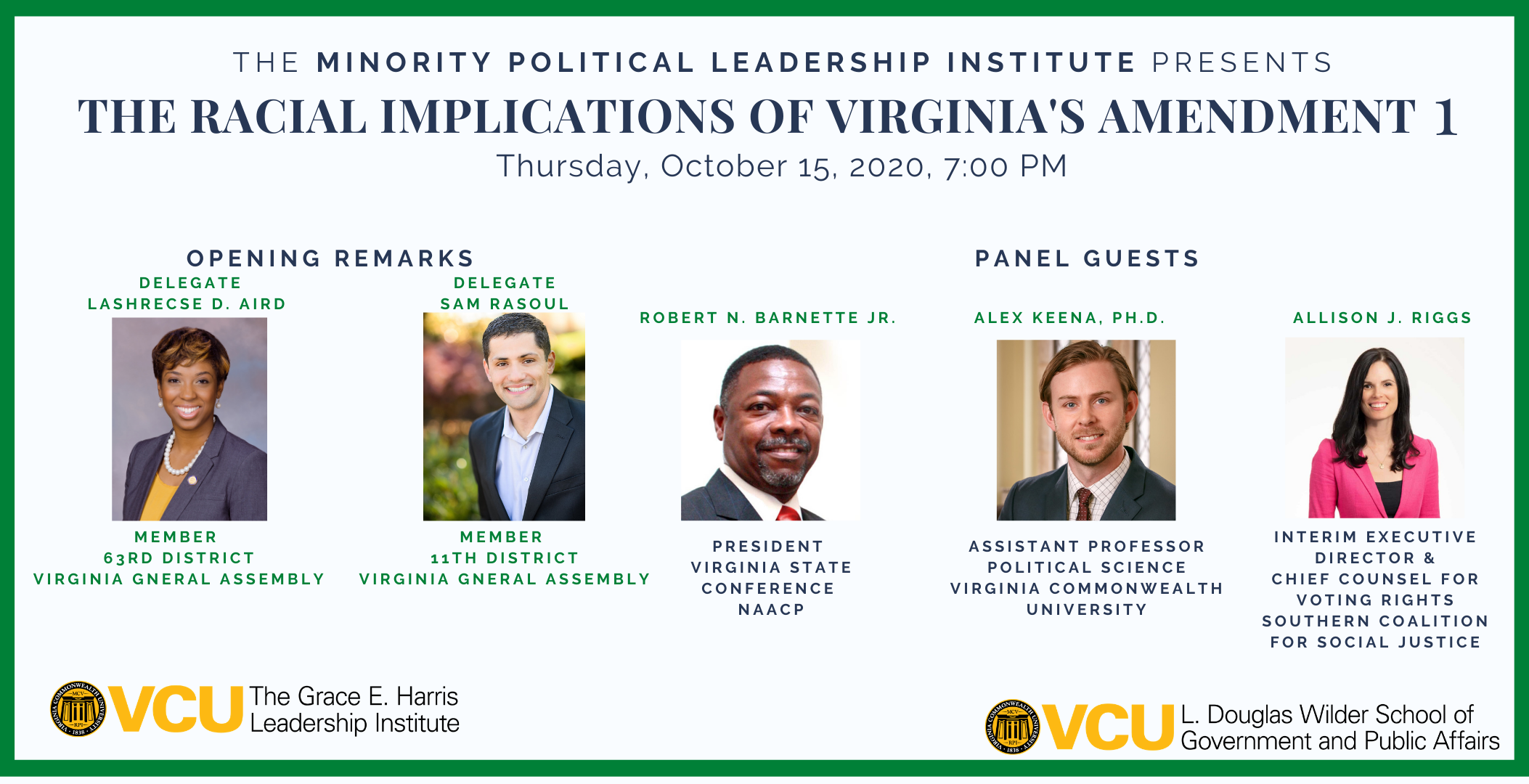 This fall, Virginians are voting on a constitutional amendment that takes up the issue of redistricting. The Grace E. Harris Leadership Institute's Minority Political Leadership Institute hosted a webinar on Thursday, October 15th featuring remarks from key political, community, and academic leaders on both sides of the discussion.

The event began with opening remarks from:

Delegate Sam Rasoul, a Member of the Virginia House of Delegates, representing the 11th District who discussed why he supports the Amendment. It offers an opportunity to engage constituents in the redistricting process. Delegate Lashrecse D. Aird, who discussed how the amendment did not go far enough to protect Black and Brown Virginians, opposes the amendment. Delegate Aird was sworn in January 2016 to represent the 63rd House District, which includes all of the City of Petersburg, all of Dinwiddie County and parts of Chesterfield County.Opening remarks were followed by a discussion with a panel of experts featuring:

Robert N. Barnette, Jr. President of the Virginia State Conference NAACP; Alex Keena, Ph.D., assistant professor of political science at VCU. He is co-author of Gerrymandering in America: The House of Representatives, the Supreme Court, and the Future of Popular Sovereignty (2016 Cambridge University Press) and Gerrymandering the States: Political Districting and the Remaking of American Federalism (forthcoming Cambridge University Press); and Allison J. Riggs who leads the voting rights program at the Southern Coalition for Social Justice. In March 2020, she took over as Interim Executive Director. Her voting rights work focuses on fighting for fair redistricting plans, fighting against voter suppression, and advocating for electoral reforms that would expand access to voting. She has litigated redistricting cases on behalf of State NAACP Conferences in Texas, Florida, Virginia and North Carolina. In 2018, she argued the Texas redistricting case in the U.S. Supreme Court, and in 2019, she argued the North Carolina partisan gerrymandering case in the Supreme Court. Allison works closely with grassroots organizations and communities of color as they seek to advance their political and civil rights.